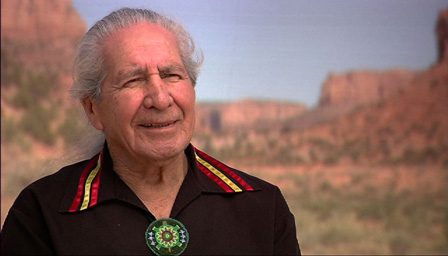 Watch "Oren Lyons - "We Are Part of the Earth" (7:38 minutes) How did (Chief) Oren Lyons first learn about his relationship to the Earth? Listen to his story...

Oren R. Lyons, Jr. (born 1930) is a Native American Faithkeeper of the Turtle Clan, of the Seneca Nations, of the Iroquois Confederacy. He is the recipient of the Ellis Island Medal of Honour, the National Audubon Society's Audubon Medal, the Earth Day International Award of the United Nations, and the Elder and Wiser Award of the Rosa Parks Institute for Human Rights. Lyons serves on the board of the Harvard Project on American Indian Economic Development, and is board chairman of Honouring Contributions in the Governance of American Indian Nations. Lyons is also remembered for his time as a lacrosse player. He is Honorary Chairman of the Iroquois Nationals. In 1989 he was named Man of the Year in Lacrosse by the NCAA.

Lyons served in the United States Army. He received athletic scholarships to Syracuse University, where he was awarded the Orange Key for his academic and athletic accomplishments. He graduated from the College of Fine Arts in 1958. A lifelong lacrosse player, Oren was an All-American at Syracuse, and after graduation, Lyons played for several teams, including the New York Lacrosse Club (1959–1965), the New Jersey Lacrosse Club (1966–1970), and the Onondaga Athletic Club (1970–1972). Upon leaving Syracuse, Lyons pursued a career in commercial art in New York City, becoming the art and planning director of Norcross Greeting Cards. Outside of work, Lyons exhibited his own paintings and in 1970, he returned to Onondaga to be closer to his cultural heritage. In recognition of his contributions over many years as a teacher of undergraduate and graduate students in the University at Buffalo, Dr. Lyons is listed as SUNY Distinguished Service Professor and Professor Emeritus of American Studies in the UB College of Arts and Sciences.

For over fourteen years he has taken part in the meetings in Geneva of Indigenous Peoples of the Human Rights Commission of the United Nations, and helped to establish the Working Group on Indigenous Populations in 1982. He serves on the Executive Committee of the Global Forum of Spiritual and Parliamentary Leaders on Human Survival, and is a principal figure in the Traditional Circle of Indian Elders. He was a negotiator between the governments of Canada, Quebec, New York State and the Mohawks in the Oka crisis during the summer of 1990. Lyons appeared on a one-hour documentary "Faithkeeper", produced and hosted by Bill Moyers on PBS. He appeared in Leonardo DiCaprio's documentary "The 11th Hour" in 2007. In 1992 he addressed the General Assembly of the United Nations where he opened the International Year of the World's Indigenous People.

This video "Oren Lyons - "We Are Part of the Earth" was produced by the Sacred Land Film Project, a project of Earth Island Institute. To deepen public understanding of sacred places, indigenous cultures and environmental justice, the Film Project produces a variety of media and educational materials—films, videos, DVDs, articles, photographs, school curricula and other materials. The Sacred Land Film Project uses journalism, organizing and activism to rekindle reverence for land, increase respect for cultural diversity, stimulate dialogue about connections between nature and culture, and protect sacred lands and diverse spiritual practices. 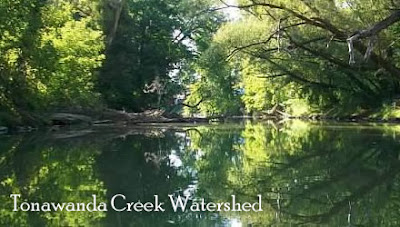 Video 2016: Oren Lyons on the Indigenous View of the World 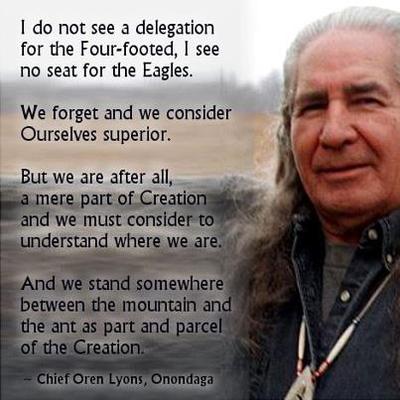 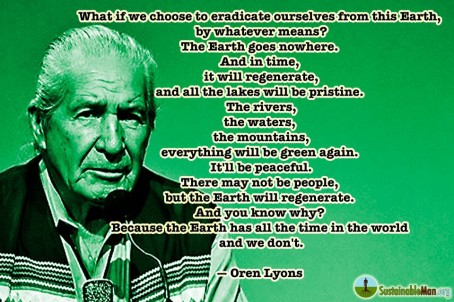