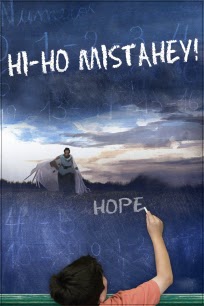 Watch "Hi-Ho Mistahey!" "I Love You Very Much!"
In this feature-length 60 minute documentary, Alanis Obomsawin tells the story of Shannen’s Dream, a national campaign to provide equitable access to education in safe and suitable schools for First Nations indigenous children. Strong participation in this initiative eventually brings Shannen's Dream all the way to the United Nations in Geneva. The movement was named in honour of Shannen Koostachin, a young child peace activist from the Attawapiskat First Nation in Canada, and a nominee for the 2008 International Children's Peace Prize.


Hi-Ho Mistahey! (which means “I love you very much” in Cree) is an inspiring look at Shannen’s Dream, a grassroots youth movement that calls for fairness in education for all, named after Shannen Koostachin, youth education advocate from the Attawapiskat First Nation in Ontario, Canada. Shannen had a dream: safe and comfortable schools and culturally-based education for First Nations indigenous children and youth. Tragically, Shannen died in a car accident in 2010 at the age of 15, but her dream lives on in the tireless advocacy portrayed in the film. This movement of people's hearts has created many transformations including "Have A Heart Day"

Hi-Ho Mistahey! had its world premiere this past fall at the Toronto International Film Festival, where it received an honourable mention for the People’s Choice Award for best documentary, and has been featured at festivals and screenings across Canada and around the world. Obomsawin originally set out to make Hi-Ho Mistahey! in 2011, but ended up releasing the film The People of Kattawapiskak River first, as the devastating housing crisis hit the community of Attawapiskat while the filmmaker was there.

Watch this "Shannen's Dream" 7 minute video created for educators, children and youth interested in learning more about Shannen's Dream for "safe and comfy" schools and quality education. It features six students, aged 8 to 11 years, speaking about the Shannen's Dream campaign, what they have learned, and how others can get involved.

About Alanis Obomsawin
Alanis Obomsawin is an acclaimed documentary filmmaker, she was born in New Hampshire in 1932. When she was six months old her family moved to the Odanak reserve near Sorel, Quebec. Théophile Panadis, her mother's cousin taught her the songs and stories of the Abenaki Nation. At age nine she was uprooted to Trois-Rivieres, Quebec. Having grown up speaking only the Abenaki language, she had to learn French and, as the only aboriginal child at school, was taunted and beaten regularly. As a young woman she learned English and trained as a beautician before moving to Montreal, to become a folksinger and storyteller. Once she started to work with the National Film Board of Canada, she continued making films with a strong focus on social justice and aboriginal people. Her most acclaimed work was the 1993 documentary Kanehsatake: 270 Years of Resistance, about the 1990 Oka crisis. In 2009 Obomsawin was selected to be honoured with a retrospective of her work and an outstanding achievement award from the Hot Docs documentary Toronto Film Festival. Her work has been honoured and shown in festivals around the world.

Other related post links with her films to watch:

Watch 1993 interview of filmmaker Alanis Obomsawin "Behind Mohawk Lines"
The filmmaker describes some harrowing moments in the making of her 1993 documentary of the Oka crisis. Kahnesatake: 270 Years of Resistance: National Film Board of Canada.