Facebook link ~ Eagle Touch The Clouds is a project to build Native American sections in all public libraries in all 50 states in the USA and through out Canada. On a winter day in 2011, three-year-old Kailee Reynolds asked her father to read her a book, and the two set off for the library. A member of the Tsalagi Nation, Puyallup Tribe of Indians, Shawn Reynolds took his daughter to the Fife Library, which sits on tribal land, and they began looking for children's books about Native Americans."There were books on Japanese culture, Korean culture, Spanish culture, but none on Native American culture," Reynolds said. He posed a four-word question to branch supervisor Tami Masenhimer:"What happened to us?" Then Reynolds asked her; "If I can get you more media, will you use it?" He spoke with his tribal council and told them what he wanted to do – "spread our culture through the library system. Let’s put our language out there." Within a week, the tribe had donated 30 pieces. 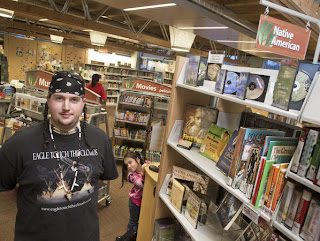 Reynolds contacted small publishing houses and recording studios with Native American titles, explaining what he wanted and asking if they would give media to the library. He laid out his plan on social media – on Facebook, he is Eagle Touch the Clouds – and authors began contacting him.

“This isn’t a business, it’s not a charity. It’s just a personal project,” Reynolds explained. “We got a CD of songs from pow-wows. Kate Elliott of the Chinook tribe donated a language CD. I’ve bought books on my own. Canyon Records gifted CDs on tribal drumming, tribal flutes and music.”

The library cooperated. “Shawn talks to me, I talk to those who build our collection,” Masenhimer said. “We had what was available from the publishers we buy from. Shawn found small publishers, sometimes books that were self-published. He became our connection to them.”

Shawn Reynolds, “I said a cultural prayer to the creator, asking for strength. I got all the hardships that build strength."

Above text excerpted from a story by Larry LaRue reporter for The News Tribune, Tacoma, Washington, Click here for the full story.