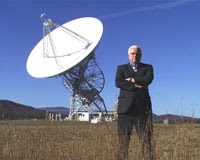 Chairman Emeritus SETI Institute, Frank Drake conducted the first modern SETI experiment in 1960. He continues his life-long interest in the detection of extraterrestrial sentient life, and participates in an on-going search for optical signals of intelligent origin carried out with colleagues from Lick Observatory and the University of California at Berkeley (using their 40-inch Nickel telescope).

Frank also continues to investigate radio telescope designs that optimize the chances of success for SETI (he proposed the plan used in the design of the Allen Telescope Array, based on some of his work of more than forty years ago.) He is also interested in the possibility that the very numerous red dwarf stars, stars that are much less bright than the Sun, might host habitable planets. In this regard, he has noted that the behavior of various objects in our own solar system – in particular the resonances between their rotation and orbital periods – when applied to some of the newly discovered extrasolar planets, strongly suggests that most planets orbiting red dwarfs will not keep one face towards their star, and thus are more likely to be habitable. If this is proven correct, it will increase by almost ten times the probable number of habitable planets in the Milky Way.

Astro Society:
The Universe In The Classroom article by Sarah Scoles and Sue Ann Heatherly
The Drake Equation: 50 Years of Giving Direction to the Scientific Search for Life Beyond Earth

i09 article:
Use this interactive chart to figure out how many alien worlds exist across the entire universe.

BBC Future, with the help of iib Studio, has put together a very cool interactive calculator that takes the Drake equation to the next level. Typically, the equation is used to estimate how many radio-transmitting civilizations could currently exist in the Milky Way Galaxy — but by adding just one extra variable, it lets you take the entire universe into account.


The Universe within 50000 Light Years ~ The Milky Way Galaxy
Image Credit: Atlas of the Universe and about these maps by Richard Powell

Galactic Sky Chart
Image Credit: Atlas of the Universe and about these maps by Richard Powell

About Richard Powell
"Richard Powell has two degrees in astrophysics - a Bachelor's degree from the University of Birmingham and a Master's degree from the University of London. For his MSc research he studied the Big Bang, trying to understand what the universe was like when it was less than one second old. He created his web page because he wanted to see for himself what the universe looked like, and he thought maybe some other people out there might also be interested."